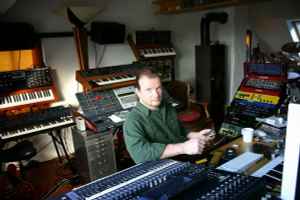 Pete Namlook was one of the most influential figures of electronic and ambient music in the 1990s. Inspired by Oskar Sala, one of the pioneers of electronic music, Namlook focused on the untapped potential of analogue synthesizers, often developed or extended in his laboratory.

In 1991 he began a second life as a disc jockey playing techno music under the moniker Sequential.

The single True Colours changed his career and a good chunk of modern music. Kuhlmann assumed the identity of Pete Namlook, opened his own Fax label and made his first album, Silence (Fax, 1992), a collaboration with Dr Atmo (and one of the first albums released only on compact disc).

Namlook understood that producing was more important than recording and he set out to discover, encourage and promote music by ambient electronic artists. During the first year alone, his label released over 100 records and CDs. The label name refers to the "fax" as a medium for fast and cheap distribution of ideas. Its humble weekly releases are equivalent to sending a fax to a group of friends.

August 31, 2019
Amazing artist! Some of the best electronic music I have ever heard. May Pete rest in peace, knowing that he has left a big legacy.
Reply Notify me 3 Helpful

August 3, 2017
The music of Peter Kuhlmann has only recently been brought to my attention. I really like the random tracks I've heard so far. However, I always find myself jumping from one album to another unable to dive into one particular record due to the sheer size of the catalog. Is there a particularly good album (or a few) that can be recommended as "starting points" to the discography?
Reply  See 3 replies Notify me 1 Helpful

I think only one question : why Namlook isn,t in fame hall of electronic music. This is mystery, cause it is one of the most unrated artists of 90,es - golden era of mixing ambient with house, techno and dowtempo. Respect Peter

I remember in the early 90ies a new Fax release was coming out every second or third day he was a dedicated & great ambassador to the scene. My only gripe with him was he wasn't a fan of vinyl.
I just a pity that he like many others aren't praised enough whilst they are alive to hear it.

I heard Music Hypnotizes (Hypnotizing Mix) when i was out raving, i just had to have that tune, i subsequently searched for Pete's other tunes, he done some corkers, hope it's like the good old days where you are now.

May 23, 2014
Your music will always live on,
rest in peace pete.
Reply Notify me 3 Helpful

May 20, 2014
DID NOT KNOW HE HAD PASSED AWAY RIP. MANY A NIGHT ENJOYED HIS SONIC BLISS IN EARLY 90s
Reply Notify me Helpful