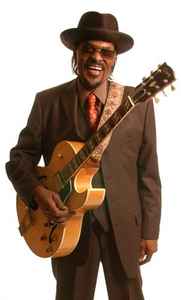 Real Name:
Charles Louis Brown
Profile:
DOB: Aug. 22, 1936 as Charles Louis Brown in Gaston, N.C.
DOD: May 16 2012 at the Johns Hopkins University hospital in Baltimore, after having been hospitalized for pneumonia earlier the same month.
He was 75.

Known as the “Godfather of Go-Go,” the performer, singer, guitarist and songwriter developed his commanding brand of funk in the mid-1970s to compete with the dominance of disco.

Like a DJ blending records, Mr. Brown used nonstop percussion to stitch songs together and keep the crowd on the dance floor, resulting in marathon performances that went deep into the night. Mr. Brown said the style got its name because “the music just goes and goes.” As go-go became a point of pride for black Washingtonians, Mr. Brown became one of the city’s most recognizable figures. In 2009, the District named a segment of Seventh Street NW “Chuck Brown Way”; it was a strip near the Howard Theatre where he used to shine shoes as a child. He appeared in advertisements for the D.C. Lottery and The Washington Post and became the city’s unofficial mascot, known for his extroverted warmth and willingness to flash his gold-toothed smile for any fan hoping to join him for a snapshot. An appearance on U Street NW outside Ben’s Chili Bowl could stop traffic.

Mr. Brown was 8 when his family relocated to Washington, where he abandoned his schooling for a childhood filled with odd jobs. He sold newspapers at the bus station and shined shoes at the Navy Yard, where he recalled being tipped kindly by entertainers including Hank Williams and Les Paul.

As a teenager, Mr. Brown began to flirt with petty crime and stumbled into a disastrous situation in the mid-1950s when he shot a man in what he said was self-defense.

A Virginia jury convicted Mr. Brown of aggravated assault, which was bumped up to murder when the victim died in the hospital six months later. Mr. Brown served eight years at the Lorton Correctional Complex. There, he swapped five cartons of cigarettes for another inmate’s guitar.

Upon his release, Mr. Brown returned to Washington, where he worked as a truck driver, a bricklayer and as a sparring partner at local boxing gyms. He also began to play guitar and sing at backyard barbecues across the area. His parole officer wouldn’t let him sing in nightclubs that served liquor.

In 1964, he joined Jerry Butler and the Earls of Rhythm, and in 1965, a group called Los Latinos. Both local acts played top-40 hits at area nightclubs; in 1966, Mr. Brown formed his own group, the Soul Searchers who scored minor hits in the early ’70s: “We The People” and “Blow Your Whistle”.

The influence of jazz and pop standards could be heard in much of Brown’s go-go material. Motifs from jazz staples “Moody’s Mood for Love” and “Harlem Nocturne” became a part of his “Go-Go Swing” and Brown reshaped Louis Jordan’s calypso “Run Joe” into a go-go classic.

In turn, go-go would have its influence on jazz when trumpeter Miles Davis plucked longtime Soul Searchers drummer Ricky Wellman for one of his last touring bands. Many spotted go-go rhythms on Davis’s 1989 album “Amandla.”

And while hip-hop raced past go-go in the ’80s, Mr. Brown eventually influenced that genre as well. He was sampled by various hip-hop artists, most notably in Nelly’s 2002 hit “Hot in Herre.”

His impact was felt most acutely in the Washington area, where his sound spawned a generation of bands and Mr. Brown was always the genre’s champion.

“Bustin’ Loose” was “the one record I had so much confidence in,” Mr. Brown said in 2001. “I messed with it for two years, wrote a hundred lines of lyrics and only ended up using two lines. . . . It was the only time in my career that I felt like it’s going to be a hit.” It was Mr. Brown’s biggest single, but throughout the 1980s “We Need Some Money,” “Go-Go Swing” and “Run Joe” became local anthems, reinforced by radio support and the grueling performance schedule that put Mr. Brown on area stages six nights a week.