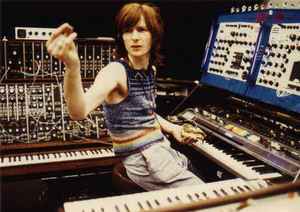 Real Name:
Timothy Charles Gorrod Blake
Profile:
Timothy 'Tim' Blake (born 6 February 1952, London) is a synthesizer and keyboard player who came to prominence with Gong and Hawkwind, he is also well regarded for his solo endeavours and was one of the first performers to bring electronic instruments into a live setting. His Crystal Machine project was also an early example of the use of laser lighting whilst in concert.

His influence are not fully recognized by the mainstream media, but his influence is huge among musicians and those deeply in the knowledge of his career, including Steve Hillage and Jean Phillipe Rykiel. His solo career took off when he left Gong in 1975, using the name Crystal Machine and being a pioneer in the use of the laser lightning show. Crystal Machine was released in 1977. This "Light Work" with long-time partener Patrice Warrener, has totally changed the world of Light Shows & Illumination, with the Introduction in the early '70's of laser light in his Crystal Machine performances, as well as the introduction of Giant Image projection, with the "HOLD-UP" as early as 1976.

His success was followed by many others till the present as well as his participation as a player in Hawkwind in the late 70s to early 80s and who Blake continues to perform with today whilst living in France. Tim's attitude to electronics has profoundly marked the sound of electronic and rock music from the late '70's to this day, resulting in a discography of more than 25 titles, including 7 solo albums.

Despite beeing very seriously injured in a car accident in 2004, Tim is clearly totally fit and continues to be part of the touring and recording set up with Hawkwind, (with whom he performs on Theremin and 'Virtual Lead Guitar).

Tim continues to collaborate with Patrice on projects using his CHROMOLITHE POLYCHROMIC ILLUMINATION SYSTEM for illuminating buildings, including York Minster, Arche De Triumph and Lyon to name a few. He continues to perform Crystal Machine periodically, the last and most spectacular of these performances was in 2006 when he teamed up with Jean Phillipe Rykiel in 2006. It was recorded at Exeter Phoenix on 2nd Sep 2006 and initially released as a download, and is now currently being reworked for release. This recording of Tim and Jean-Philippe Rykiel sees them performing together for the first time in 30 years
Sites:
moonweed.free.fr, Wikipedia, Facebook
Aliases:
Hi. T. Moonweed, Saratoga Space Messengers
In Groups:
Clearlight, Delired Cameleon Family, Gong, Hawkwind, Nik Turner's Sphynx, Paragong
Variations:
Viewing All | Tim Blake
Blake, T. Blake, Tim, Tim "Moonweed" Blake, Tim Blake (Crystal Machine), Tim Blake's Crystal Machine, Timothy Blake

March 12, 2019
i think there's a big difference between his first and second albums. i like the first one quite a bit, but already by the second one his sound has become more commercial and he adds vocals which are quite bad in my opinion.

His first two albums, Crystal Machibe and New Jerusalem are MUST HAVES for any fan of synth/space and for fans of what he did for Gong and does for Hawkwind. Most of CM is like what he did for Gong, but with the bsnd removed just leaving his very cool synths and sometimes vocals. Very cool.