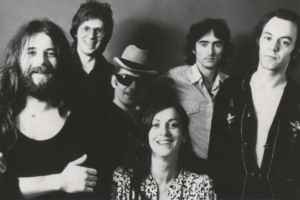 Profile:
Amon Düül II was born of an artistic and political community’s scission called Amon Düül (who recorded a long live session in the late sixties made around collective and free musical improvisations). The band emerged from the underground German rock scene with a very original and eccentric album called "Phallus Dei" (1969). The musicians who participated to this delirious and psychedelic experience were (among others) Peter Leopold (ex Amon Düül), the front woman and singer Renate Knaup, John Weinzierl on the guitars... with guests as Holger Trützsch who plays tribal percussions (original member of Popol Vuh). Then almost with the same musicians the band recorded the seminal "Yeti" (1970). An album in a similar vein as the previous but more accomplished (with a couple of structured songs always with numerous pieces of epic improvisations). "Yeti" will launch Amon Düül II career outside Germany. The same year the bass guitarist Dave Anderson leaves the band to join Hawkwind.

November 22, 2021
The first 3 LP's represent the deepest, darkest, hairiest and heaviest krautrock ever made. No art house / jazz tendencies for the beard-strokers, no experiments only mental, successful forays into the wildest territories of rock music. Incredible, evocative, primitive and straight from the heart.
Reply Notify me 2 Helpful