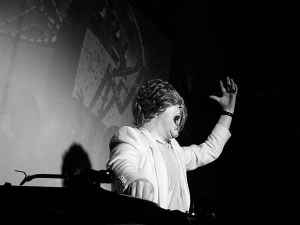 Real Name:
Jason Forrest
Profile:
American electronic music producer, born April 5, 1972 in Fort Mill, South Carolina. His style is an eclectic mixture of breakcore, experimental electronica, drill-n-bass, IDM, mash-up and other fast rhythms and club elements. Until 2004, Jason Forrest mostly released his music under the name Donna Summer (2) – as an allusion to a famous disco singer. Since 2008, he started using this pseudonym actively again, now as DJ Donna Summer. He created Cock Rock Disco label in 2001 to release his own and friends' albums and also co-founded Nightshifters label with New York DJ Jubilee (5) in 2008.

His music is largely produced on a single computer and many of his tracks includes digital samples from various other artists, found sounds, etc. While performing live only with laptop and a mic (in most cases), Forrest is known for his vicious and extremely energetic performances, with a lot of action and rock-n-roll/hard-rave inspired stage routines. Jason Forrest released a bunch of CDs, LPs, and 7-12" mostly on Sonig, but also his own CRD, Broklyn Beats, Hoss Records and several other labels. Music videos Steppin Off (directed by Jon Watts, 2005) and War Photographer (director – Joel Trussell, 2006) were highly praised by audience and critics, mentioned as a video of the year by Res magazine and Pitchfork Media and winning several awards at international film and video festivals.

Forrest was also hosting "Advanced D&D with Donna Summer" show at radio WFMU in 2002-2005, playing primarily unreleased new musicians and CD-R stuff, which took up to 80% of his repertoire. The archive of the show is currently available at WFMU site. After relocating to Europe, in 2005 Jason co-founded Wasted festival with DJ Pure and Club Transmediale, focusing on breakcore and related genres. Mini-festivals took place in Berlin, Hague, Riga, Prague, Toulouse, Marseilles and other places.