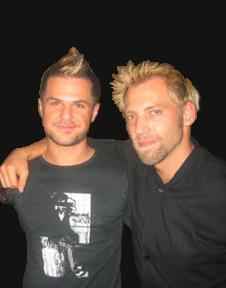 Studying guitar from when he was 7 years old and after singing and playing in a string of bands, Antoine decided to use his expertise towards electronic dance music creation. "At a certain point I felt limited by playing in bands with only guitars, a bass and drums. I felt that in electronica there were unlimited sound possibilities, which is much more appealing to me as an artist" he says.

Adam, on his side, has devoted his life to keyboards and electronics. Adam had his own small studio with samplers, synthesizers, and drum machines at only 10 years old! "I’ve always been fascinated by the ways you can use technology to create music. From growing up in the 80’s listening to Depeche Mode and Duran Duran to when Antoine first introduced me to electronica, I’ve had an undying passion for expanding my knowledge for electronic music and the equipment used to create it" he says.

Together, they stormed into the electronic dance music scene with their first single "Empire" which landed them a record deal with Paul Van Dyk's Vandit records, after the track was handed to the German Dj at one of his marathon sets at the legendary club Twilo in New York City. The single was described by critics as "mindblowing" and "ten minutes of total pleasure". The track was remixed by the international Dj and can be found on his first compilation "The Politics of Dancing" (2001). It can also be heard other compilations such as the first "Vandit Sessions" compilation CD and Cream’s "Future Trance Ibiza".
Sites:
secondsun.info
Members:
Adam Cavaluzi, Antoine Toupin, Matt Cerf
Variations:
Viewing All | Second Sun
Second

Antoine Toupin & Adam Cavaluzi was discovered by Paul van dyk and since then their carrer has been huge. Antoine Toupin also sings and he has an amazing voice. Their music style is all from Oldschool electronic music to Trance. Their biggest tune is Empire which was their first release on Vandit Records. Last year they released their debut album "Inside Out" and the response was huge. Every release they come out with is so good that words cant describe. I really love these guys...