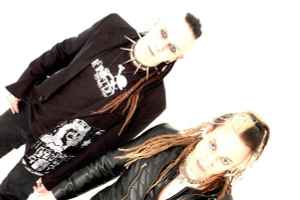 Profile:
UK Hard Dance act. Adam and Les formed Lab 4 in 1994 and soon secured début gigs at fetish night Torture Garden and then Club UK in Wandsworth, London. In the late 90's regular PA's at trance club nights such as Escape From Samsara in Brixton, London, brought them greater recognition. Into the 21st century they grew to become the biggest live "Hard Dance" act in the UK with regular gigs overseas and subsequently gained a large and loyal following from fans across the globe.

July 23, 2021
Saw these gents in 2000 at an outdoor affair in Ottawa, Ontario, CA. To be honest, I wasn't sure what to expect, as I was not familiar with them, but they headlined as a hard dance act with the one and only Max Graham... He was who I was there to see, as I loved his creative genius and track selection. Max would come on later and bring us back to Earth, but Lab 4 had the dark period before sunrise... So they get setup, take the stage and I was blown away. Their energy, unique sound and enjoyment won me over. Ripping synths, crushing baselines and overall live production was the best live PA I have heard, of any style/genre, and I've heard quite a few. I''ll never forget those 2 gents behind their racks of equipment, jumping around and exciting the crowd, as well as each other as they gained a new legion of fans! They were a sight and sound to behold.
Reply Notify me Helpful

So, I'm merely commenting in 2019 to reiterate just how incredible "Reformation" and (to a slightly lesser extent) "Reformation II" still are more than 20 years later (and nearly 25 years after the original "Trance Formation," which was reworked to perfection with the original "Reformation"). Absolute belters.

December 26, 2014
The best hard dance live act and producers duo in history. Legends in uk scene. Just listen it and feel the power of god's lab!
Reply Notify me 1 Helpful

June 29, 2012
Back in the day nothing beat walking into a club to the throbbing pulse of bassline and sonic wizardry of this pair of performers... without fail they smashed the place and nailed the atmosphere to the wall.

Anyone in the harder dance side of things will love it, especially if an appreciation of techno and psy influences floats your boat too :)
Reply Notify me Helpful

June 17, 2011
agreed behemoth especially in the 90s......
but people think they went to commercial but i do and dont as lab 4 created their own genre althought some are to hardhousey . although when i saw adam live at the emporium in coalville about 2008 or 09 cant remember exactly he was completely different more techno...

June 9, 2002
Taking hardcore, acid techno, hard trance and hard house and welding them into one big, evil, throbbing mess, Lab-4 are about as hard as they come. These boys take no prisoners.
Reply Notify me 3 Helpful