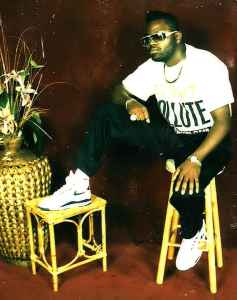 The magic moment. That's when the DJ puts up that fantastic sequence, makes that mixing, or use of 'that' acappella. Or even, do many of these things together, and the result, obviously will be the cataclysm on the dancefloors.

I experienced this kind of situation when I heard a set from Farley Jackmaster Funk @ WBMX, Chicago manny2, 1987 where he created an incredible mixing atmosphere. Farley is the type of DJ you definitely won’t forget if you have the chance to witness (and listen). Specially when he combines 'MFSB - Love Is The Message' amazing orchestration arrangements with the super classic 'Carl Bean - I Was Born This Way' drop; the piano lines goes amazingly with Carl's super vocals in this magnificent production made by the trio Norman Harris , Ron Kersey , T.G. Conway.
Suddenly, with two records beating together, Farley Jackmaster Funk makes a backspin on one of them, and you hear with the beats the quote "You, you! You may not understand.... I was born this way!"; "Hell the World, I was born this way!" - followed by the drop out with all the orchestrated horns, bass & piano arrangements of "I Was Born This Way". This classical Disco orchestration ensemble sounded very special on that moment of is WBMX set of Chicago, 1987 - the sequence falls in a new drop with guitars & rhythmic Disco hi-hats, when Farley puts together a Martin Luther King quote of his famous 'I Have A Dream' acappella where he says "I wanna thank God! Once more for life, and me to be here with you!", creating a sublime moment; then, the same orchestration continues with the greatness of Carl Bean's vocals again, followed by a piano solo of the same tune... you just couldn’t believe in it.
The result of this music combination had a so strong impact in my life that became one of the main reasons behind the changing in the way I used to see a DJ repertory as a whole.
As if it wasn't enough, the next music choosen by Farley was 'Change - Glow Of Love' with its beautiful pianos and Luther Vandross' vocals. If you by any means think that this repertory had any less than great moment, you're wrong - that mix had also tunes such as 'Dan Hartman - Relight My Fire' feat Loleatta Holloway, 'Taana Gardner - Work That Body', 'Jungle Wonz - The Jungle' (by Marshall Jefferson), 'Rhythim Is Rhythim - Kaos (Juice Bar Mix)', 'Fingers Inc.'s dub atmosphere on "Distant Planet", among another fantastic music masterpieces. "My Love Is Free", the tune that opened Farley's DJ set is, needless to say, is one of the most amazing Disco masterpieces ever.

Regardless of your opinion about Farley 'Funkin' Keith (baptized later 'Jackmaster' Funk) as a producer, he deserves respect as a DJ for being one of the few to understand (and to master) the holistic perspective of a repertory construction. That performance which took place at WBMX Chicago in 1987 had tunes from the seventies and eighties, new and old, from different types of music styles, harmonically connected. An example to be followed, as well as what The Wizard (Jeff Mills) used to do on WJLB at that time.