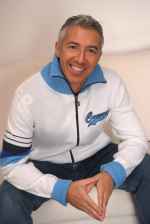 Real Name:
Maurizio Braccagni
Profile:
DJ Lhasa started his experience as a DJ in 1987, and eventually released his first records in 1989. During his dj-nights, he plays techno music, especially from Northern Europe, and this style influenced his future artistic direction.

In 1993, under the name of Two Cowboys, he reached the top of the European Sales Charts with the track titled "Everybody Gonfi Gon". Thanks to this hit, Maurizio B. made himself known as top DJ playing in many clubs throughout Europe and mixing many dance and pop acts. (i.e. Whigfield, JK & Berry.)

In 2001, Maurizio B. produced "Little Girl", a song that broke not only the Italian dance and sales charts, but also the international charts.

In June 2002 the DJ Lhasa project sees the light. The first single was titled "Heaven Is a Place On Earth", a cover of the smash hit of Belinda Carlisle that got very positive results especially in the Asian markets. "Pinocchio" was the follow-up and it has been licensed all over the Europe.

"Giulia" (originally performed by Gianni Togni) was DJ Lhasa's big break. It had reached #1 in Italy, Spain, Canada, Austria and in the next weeks it was released all over Europe.

"Giulia" was a massive hit in the summer of 2003, after spending five consecutive months in the top ten of the Italian dance charts.

The fourth single "Together Forever" was a new version originally a #1 single for Rick Astley in 1988. In Italy, it picked up a huge radio support which led to it being one of the biggest dance hits of this winter. It would then become the top 5 in all of the dance charts and in the top 20 in the sale charts. In Austria, it is top ten and it will be released in the next week in all of Europe.

Now DJ Lhasa is hugely in demand for gigs, especially in Austria, Spain, Denmark, France and Russia. Other remixes produced by him are "Pretty Green Eyes", "Feelin’ Fine", "Better Than Life" by Ultrabeat and "Lonely" by Deep Spirit.

"No controles" was the new single for the summer 2004, kicking charts all over Europe and gave the push for DJ Lhasa to start working on his first release for 2005. The stunning "Mysterious Times" critically worldwide acclaimed.