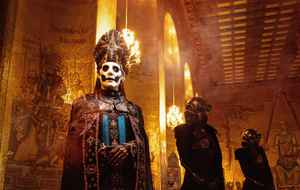 Due to legal issues, the band was briefly forced to release music under the Ghost B.C. name in the United States. They absolutely refused to use the name on any merchandise or in any other manner.

Tobias Forge revealed himself as "The Man Behind The Mask of GHOST" in first public interview on August 17, 2017 on Swedish Radio Channel P1, confirming that he is the lead singer and primary composer. The identities of the Nameless Ghouls have been speculated upon, but never officially confirmed either by the band or the musicians themselves. A lawsuit brought against Forge by former members in 2017 identified a number of past members. Since 2017, Forge has been the only official member of Ghost.

February 16, 2022
has anybody seen those rare 7 inch rats vinyls i have only seen two on eBay the ones that were clear and black
See 7 replies