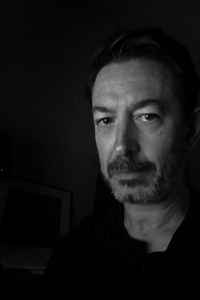 He began in the early 90's with a metal oriented band called Moon Revolution based in Marseille. In 1996, he released an ep entitled "French Kissin" under the name The Soul Lives in Berlin, a project in the vein of Ministry.

Lambwool was born in 2000, with Dead Can Dance, Tangerine Dream, Labradford, Brian Eno and "Heaven Deconstruction" by The Young Gods as main influences. Lambwool music is made of ambient and cinematic pieces that call meditation and introspection.
His first demo, "Half Alive" (2001) won the D-Side Magazine contest. The following year, he released a second demo, "UnBorn".

In 2005, his first album "Fading Landscapes" (featuring a photo book by Peter BENGTSEN and including a duet with Othila) is released on Divine Comedy Records. The album was "Album of the month" in Elegy Mag and has been noted 9/10 in the infamous Orkus Mag.

In 2008, after few appearances on various compilations, a second album is released, also on DC Records, called "...and the angel is gone". This album is based on the departure and solitude and is still illustrated by enigmatic pictures of Peter BENGTSEN. It includes a guest appearance of Sigma (from Komplex) on vocals for one track. This album has been graded "best dark ambient album never released in France" by the famous electro french mag D-SIDE. and included in the "Best French Albums 2008" poll by the also famous NOISE Magazine.

The same year, a split album with BABYLONE CHAOS and LE DIKTAT was released on OPN Records. An original project mixing 3 totally different universes to create one world. Playing with indus, electro and ambient pieces, this album is an unique experience.

In 2009, Lambwool can be found on the sold out "ELECTRONIC MANIFESTO 3- TRIBUTE TO MUTE RECORDS" (M-Tronic Records), with a DEPECHE MODE Cover including a special guest.
Then, he appears on 2 tracks of the ultimate KULFI album "5th Estate" (one track on the vinyl version -released on DIVINE COMEDY Rec-, the second on the CD version -still unreleased)

In September 2009, "Mono" is released on OPN Records. This limited Lp vinyl is composed by a long piece of music cut in two parts, as it was done by the 70's electronic pioneers -Tangerine Dream, Klaus Schulze, Edgar Froese... Once again, Peter BENGTSEN makes the cover of this special album, dedicated to Cyril Laurent's father who passed away during the last day of recording.

In the summer of 2012, OPN Records releases "A sky through the wall", a 2 CD package including a new album and a bonus CD full of unreleased and rare stuffs that celebrate 10 years of Lambwool works. This sumptuous digipack is illustrated by the great photographer Jerome SEVRETTE. At the end of the year, Lambwool and SEVRETTE unite again for the "Terres Neuves" project. This sold out compilation, based on SEVRETTE pics, mixes photography, writing and music featuring And Also The Trees, Jerome Tcherneyan from Piano Magic, Aswefall, Ulan Bator...and many more artists.

2014 sees the birth of 2 records on OPN Records during the same day.
First, an album called "Post" in duet with Nicolas Dick from KILL THE THRILL, (who also has a solo career into ambient/improvised music based on guitar). On this record, the two artists create a real personal universe, mixing ambient and noisy/shoegaze atmospheres for a very emotional result...
Then, an EP called "Vanish", including 4 tracks based on airy introspective soundscapes, full of melodies and melancholy.
For both of them, Jerome SEVRETTE offers a wonderful serie of artworks.

After few years of silence, Lambwool comes back with several digital releases as "Islandi" (2018 -based on a road trip in Iceland) and "Isolation" (2020- a spontaneous record made in real time during the Coronavirus lockdown period).
He also did appearances on several compilations around the world and as a remixer for Kore Kosmou, Olowex and Cruise Ctrl.
Sites:
Bandcamp
Aliases:
LBWL