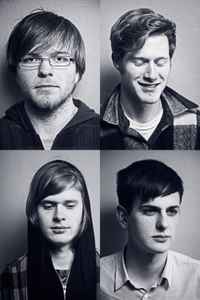 For A Minor Reflection

Energetic, melodious rock band, For a Minor Reflection comprises of four 23-year-olds from Reykjavík, Iceland. Kjartan Holm (guitar), Guðfinnur Sveinsson (guitar & piano), Elvar Jón Guðmundsson (bass) and Andri Freyr Þorgeirsson (drums). Far from simple to define, their music expands and subverts itself with every song.
Starting life as a hard rock duo in a tiny garage in Reykjavík, For a Minor Reflection (FaMR) morphed into an indie rock trio, for a week or so, then a blues quartet, for a little longer, before finally arriving at their current
incarnation: instrumental post-rockers du jour.
Back in 2007, their debut album ‘Reistu þig við, sólin er komin á loft…’ (Rise, the sun’s up…) got them a small but passionate fan base. A mesmerizing, hour-long tapestry, the album features six songs and was recorded over a weekend at a friend’s studio. This record, as well as their energetic live shows, has earned them a slew of accolades, including favourable comparisons to Explosions in the Sky, Caspain and Godspeed You! Black Emperor. Their fellow Icelanders Sigur Rós even described them as the “band with the potential to out do Mogwai”.
Following a scintillating live performance at 2007’s Iceland Airwaves, FaMR were invited to undertake a two-week 2008 tour in the USA and Canada.
Later in the same year the band were invited to do 15 dates with Sigur Rós on a European tour and used the opportunity to release their album on iTunes. The band sold out on the 2000 albums they manufactured to sell on tour. The total sales figures amounted to 5000 copies. Not bad for a modest demo recorded in a home studio.
Needless to say the tour with Sigur Rós attracted the attention of promoters. They landed a showcase slot at Eurosonic at the start of 2009 and a months headline tour in Europe. Spending the rest of the summer writing a new album, FaMR chose the Sigur Rós studio in Iceland to record 10 new songs with LA producer Scott Hackwith. The album, Höldum í átt að óreiðu” (Heading in the direction of Chaos) was released in 2010 and the band toured in Europe, enjoying a steadily increasing fan base.
In 2011 things have really started heating up with an American Tour concluding with a slot at the legendary SXSW Festival. In the summer of 2011, they warmed up for Hardcore Punk/Metal band Converge proving the diverse following that their music invites. On the road again, in the summer of 2011 FaMR performed at the Sziget Festival in Budapest, Hungary. Despite the sweltering heat, they managed to attract attention and followed the festival with gigs in Estonia, Latvia, China and Culture Collide in USA
Sites:
Facebook
Members:
Andri Freyr Þorgeirsson, Elvar Jón Guðmundsson, Guðfinnur Sveinsson, Jóhannes Ólafsson, Kjartan Holm