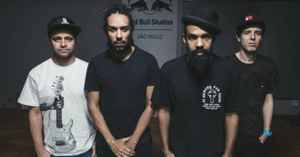 Profile:
BaianaSystem is a musical project formed in 2009 with the aim of finding new sound possibilities for the Bahian guitar, an instrument created in Salvador - Bahia in the 1940s and which was responsible for the creation of the electric trio. The name comes from the junction of "Bahian guitar" with "sound system", which are sound systems created and popularized in Jamaica. The initial idea was the use of new and / or known bases where the guitar could assume the role of "singing" in this system, dividing and dialoguing with the voice.
In 2016 the group gained international visibility with the track "Playsom", which is part of the soundtrack of the game "Fifa 2016" of Eletronic Arts, the song is part of the second album of the group, Duas Cidades.
Sites:
baianasystem.com, Facebook
Members:
Filipe Cartaxo, Robertinho Barreto, Russo Passapusso, Seko Bass
Variations:
Viewing All | BaianaSystem
Baiana System