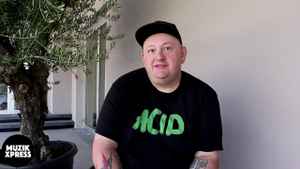 To say that old-schooler Jones is a daring trend-setter might be a bit of a stretch. In fact, Jones's career follows that of an artist who has to make a living out of his craft and therefore often coincides with what is popular at the time. Ravey techno in the early 1990s, hard trance in the mid-1990s, hardcore, then progressive techno until the millennium, and even harder Acid in the 2010s. Let us be clear, he can probably appear as a bit of a crowdpleaser, from time to time. However, what he might lack in adventurousness, he more than makes up for with versatility, passion and skill, as well as a good ear for what is going to work next.
Even if what he plays nowadays is not always my bag, the man still gets huge respect from this reviewer for his longevity and the quality of his work as a DJ (some of the hottest old-school sets ever), a producer (his early Bonzai releases, to name but the obvious) and a party organiser (Techno '94 anyone?)

Quite fitting to choose to post this review today: incidentally, on a 24th March, Franky Jones was having his 27th birthday party at the Rave-Zone Montini, a famous Belgian club. He had one of the top slots in an all-star lineup and I remember being impressed by this first encounter. Amongst many other things, he played Protect System - Simplicity, which I had bought a couple of days prior, as well as Emmanuel Top - Fly Tox. The year was 1995, the future was full of promises. Most of them have not been kept, but that is another story. Happy birthday, Frank!