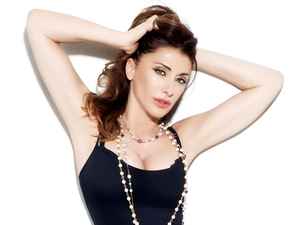 Real Name:
Sabrina Debora Salerno
Profile:
Italian singer, born 15 March 1968 in Genova, Italy.
In her native town, Genova, she attended the Foreign Languages High School. But as early as at the age of 15 she started winning Beauty Contests: first Miss Seaside, then Miss Liguria. In 1986 Sabrina starts her career as a show-girl, in the TV program "Premiatissima" with Johnny Dorelli. Later on she took part in the Channel 5 show "Grand Hotel": it was on that occasion that she met DJ and producer Claudio Cecchetto. The same year Cecchetto produces for her "Sexy Girl", Sabrina's first hit in the Italian and German charts. Between 1987 and 1988 the Artist takes part as a singer in the "Sandra & Raimondo TV Show": during the Summer her first album is released, with the simple title "Sabrina". With "BOYS" (recently remixed for the international markets) Sabrina tops all European, South-American and Australian charts. In Spain she is considered a true sex-symbol for her sunny and mediterranean beauty. In England she is produced by Stock Aitken and Waterman for the single "All of me". In 1990 next to Raffaella Carrà, Sabrina is back on TV in the show "Ricomincio da 2" on RAI 2 Channel. In 1991 Sabrina takes part in Sanremo Festival, in a duet with Jo Squillo with the song "Siamo Donne", later included in the album "Over the Pop" and, after a new successful international tour, she gets back to Channel 5 to compère the show "Bellezze sulla neve" ("Beauties on the snow"). A long period of work in a recording studio bring Sabrina to a radical artistic change. In Summer '94 a new artistic career is started: with a production team headed by Monti-Portaluri and Zafret, is released the mix "Rockaville" , which again gets a good success not only in Italy. The collaboration carries on with the mix "Angel Boy" which sees the participation of famous English rapper Neal A.D. In Summer '95 the single CD "Fatta e rifatta" is released, an ironic song that was much talked about by the press and media. In October '95 her first rock album, completely in Italian language, is released. The title is "Maschio dove sei" ("Male, where are you"), and is produced by Massimo Riva, with the collaboration of Vasco Rossi. Sabrina's sudden change to rock is well accepted, and the album gets released in several European countries.
Sites:
sabrinasalerno.com, Facebook, MySpace, Wikipedia
Aliases:
Sabrina Salerno
Variations:
Viewing All | Sabrina
Sabina, Super Sabrina, Сабрина, サブリナ

Outside Italy, Sabrina is only known for her recordings but there's more to her story that just that...

She was about 13 when she was discovered by Genova-based manager Giampiero Menzione who saw in her a future pin-up girl at first. Within a short time, she became a dancer hired in by TV channel Canale 5 in Italy. At some point she was asked "couldn't you sing as well as you already dance in TV shows?" leading to the amazing success of the single "Boys" (mostly known for its video). At some point while moving about in a swimming pool during the video shoot, her bathing suit's bra fell off. She imagined that the offending scene would be cut off... but the TV show editors left it in and actually enhanced the scene as much as possible, running it in slow-motion!

Generally, Sabrina is regarded as a black-haired version of the "dumb blonde" icon, but that is as far from the truth as can be. Besides a great ear for languages, she is also highly intelligent, a hard worker from early in the morning and a fast learner when having to quickly memorize choreographies and stage / TV moves so she also branched out to be a film actress. She is nowadays retired from active Pop duties but helps husband and producer Enrico Monti in nurturing new talent.

Jesus Christ and Mary, Mother of God! Although Sabrina is a cuttie with two natural boobs, her music sucks below the belts of DJ Bobo, masterboy, Corona and Samantha Fox altogether (and beyond).... Just for fun, read lyrics to 'Boys', 'Sexy Girl' or 'Hot Girl' (where's the difference between the two anyway?!) and imagine anyone dancing or singing to it (I already blush my ass out of embarrasment)... and Sabrina is still a cuttie with two natural boobs (dropping out of her wonderbras from time to time)...