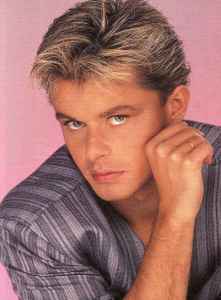 Stefano Zandri performed as 'Den Harrow' visually, while the vocals were provided by other singers including Chuck Rolando, Silvio Pozzoli, Tom Hooker and Anthony James and production was handled by the team of Turatti & Chieregato. Over time the name 'Den Harrow' came to identify only Zandri, who continues to use the alias. In 2012 Zandri admitted that he never sang on any 'Den Harrow' records. Zandri (now living in Brescia) continues to make public appearances as he re-recorded all the old hits with his voice after taking voice lessons since 1998.

Stefano Zandri started his artistic career in 1983 when he met in a club, Roberto Turatti & Miki Chieregato, two of the most famous producers of disco music. With his productions 'To Meet Me' & 'A Taste Of Love'. Den Harrow had good success in Italy, Greece, Spain & UK. In 1984 & 1985 'Mad Desire' & 'Future Brain' entered the top ten of all Europe. With 'Future Brain' Den Harrow won. In Italy, The Festivalbar and Vota La Voce & In Germany became an Idol of Teenagers.

In this period he was very busy with Turnee & Recording but he also had time for releasing two LPs which entered the top 10 in the album charts in France, Gas and Beneleux. In 1987 'Don't Break My Heart' won, In Germany, the prize for most popular singer. His album 'Day By Day' sold 1, 000, 000 copies & remained at number 1 in the German charts for 8 months. Winning eight gold discs and one platinum disc.

The Turatti/Chieregato/Hooker production team was unstoppable in 85-87.
I think the model for Den Harrow (Stefano Zandri) gets a somewhat bad rep - Zandri was a big part of the Den Harrow success. He was the persona, the dancer with a charismatic stage presence.
It may have worked with T.Hooker as the face, but with the model, it worked even better.

February 18, 2011
Right, say what you want... Boney M. do it before, Milli Vanilli after and many other at this time. Beautiful second Album "Day by day", Mad desire, Future brain, Bad boy, Don't break my heart, Energy rain, Dangerous, Waiting for the sun are beautiful tracks from the 80's. In Germany Den Harrow won the "BRAVO golden Otto" in 1987 as favorite singer and pointed Michael Jackson to the second place. Thanks to Tom Hooker, who sung the most of Den Harrow's eighties songs.

December 10, 2002
Say what you will about Den Harrow and his looks, but "Mad desire" and especially "A Taste of love" are all classy and good early 80's Italo sound, music from a very special era of disco.
See 1 reply