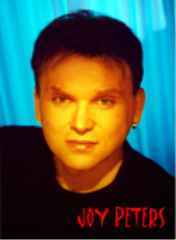 Profile:
Austrian Euro Disco star from mid 80's, born in Vienna (Austria), established in Germany.
In 1985 I was discovered by Axel Breitung in Hannover while he was singing in a Disco .
He colaborated with Axel Breitung only 5 years for 3 singles and one 10 track unreleased album due to divergence between Joy's manager, producer and the record company.
Nowadays he sings most of the time in night clubs all over the world and on cruise ships.
Sites:
joypeters.info, italo-interviews.com
In Groups:
V Project
Variations:
Viewing All | Joy Peters
Joe Peters, Joy, Peters

March 19, 2018
It'd nice to come across one day on "Who Took My Girl" (year of release 1987) pressed on vinyl, another splendid track that would deserve a record on its own.
Joy for everyone!...