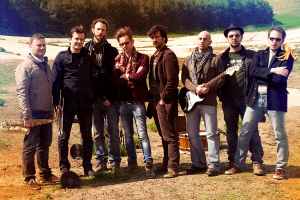 Profile:
Municipale Balcanica was founded on 2003 by Nico Marziale, Paolo Scagliola and Raffaele Piccolomini, the band became also a no profit association, with the purpose to improve the knowledge of Eastern European music, since 2004 with the founders that got the leading roles of president, vice and artistic consultant.

On 2004 MB released its first DEMO “Con-tradizione” that soon got sold out. The success of “CON-tradizione” allowed the band to start a massive live activity. After this experience, on 2005, MB records its debut album “Fòua”, that was recognized by the audience and the press as a profound synthesis between the world music and the radical, typical sound of their homeland, in the Southern Italy.

“Fòua” got famous even abroad thanks to the absolutely original and unconventional editions of traditional yiddish: “Folk World” magazine described MB's version of "Hava Nagila" as "the best in a thousand versions recorded in last thirty years".

The MB's approach to ancient melodies is peculiar and distinctive, due to the different musical backgrounds that each musician has brought to the band. The whole brass section, that's the real core of MB, for example learned to play their instruments when children in the traditional typically Italian “banda” of their town. As well the rhythm section has a rock and jazz-oriented appeal. And jazz has a very important role in the arrangement and live attitude of MB, making the Eastern and exotic tunes and soloes more frantic and passionate.

On 2006 Municipale Balcanica earned the chance to play in a lot of international festivals, either folk and jazz. MB toured in Germany, France, Portugal, Bulgaria, Turkey, Slovenia and Poland, and the audience acclaimed the energetic, funny and deeply poetic gigs of the band.

“Road to Damascus” got very flattering reviews throughout the world, and Italian magazines wrote that MB's was “Brilliant, shining, powerful and inspired” (Il Mucchio Review February 2009).

On 2010 MB started the project “Tra Sponde” (“Between shores”) sharing the stage with the best known Balkanic band Kocani Orkestar, and playing with its virtuoso Macedonian musicians in several jazz festivals such as Berlin, Ravenna, Foggia, Taranto.

On 2011 the “Road to Damascus” tour went on with many international dates, and it's worth to mention the collaboration with the trumpeter Marko Markovic wich played in a brand new edition of the show with Municipale Balcanica during the summer.