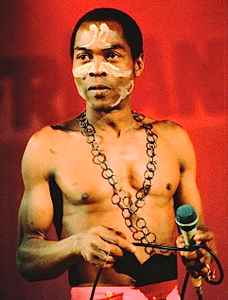 He formed his first group Koola Lobitos in 1963. The large jazz, funk, and afrobeat collective underwent many changes in the following decades but the style remained the same thanks to Fela's vision and other key members such as drummer Tony Allen.

In 1969 after visiting America, Fela returned to Nigeria and opened club Afro Spot in Lagos also changing the group's name to Afrika 70. He played with Ginger Baker on the album Ginger Baker Live with Afrika 70 and Fela Kuti, released in 1971 and along side Bobby Gass, better known as Bobby Tench from The Jeff Beck Group, on Stratavarious which was released the next year. In 1981 Fela changed the group's name for the last time to Egypt 80.

He was known as Fela Ransome-Kuti until about 1978, when he renamed himself Fela Anikulapo Kuti, the middle name meaning 'he who carries death in his pouch'. He was a human rights revolutionary who started his own political party, Movement Of The People, to protest the kleptocracy in Nigeria. He had his own compound called the Kalakuta Republic in Lagos, which he declared independent from Nigeria, where he and his uncountable number of wives lived and they were constantly terrorized by the government.

His influence on funk and African music is unsurpassed and has put his name to many albums, the total number thought to be 77.

January 30, 2022
I had the pleasure of seeing Fela in Chicago in 1986 - I can still remember it, because it was such an experience ! There were about half a dozen female dancers dressed in full regalia shakin', grindin', and bumpin' them asses all night long - the band was super tight, with Fela leading the whole way - I was right in front, shakin', grindin', and bumpin' right along with 'em, and, combined with the ganja and alcohol, such a heady (and sweaty!) experience !!!!!
See 1 reply

June 22, 2021
just picked up "The Complete Works Of Fela Anikulapo Kuti" boxset.
well worth the money. 51 albums on 29 cds plus a dvd.
so many ESSENTIAL discs...
Zombie
Before I Jump Like Monkey Give Me Banana
Opposite People
Ikoyi Blindness
Kalakuta Show
Why Black Men Dey Suffer (with Ginger Baker)
Yellow Fever
Shakara
Gentleman
J.J.D. (Johnny Just Drop): Live!! At Kalakuta Republik
Unknown Soldier

the brilliance of FELA!!!

The King of Afrobeat never sold out! If I had to pick one album to recommend it would have to be 'Confusion', a dance symphony driven by the rhythm assault of the awesome Tony Allen. Also listen for the usual blistering brass-section and the man himself: the late, greatly-lamented Fela Anikulapo Kuti. HE WILL LIVE FOREVER!