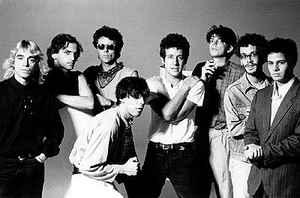 Titãs are one of the most successful bands in Brazil, having sold more than 6.3 million albums and having been covered by several well-known Brazilian artists and a couple of international singers.

They started their career as a nine-member group. Apart from Reis, Mello, Fromer, Antunes, Bellotto, Miklos and Britto, they had also Ciro Pessoa as one of the lead singers. However, he quickly left the band even before the first album, Titãs, was released. André Jung was the initial drummer, but just after Titãs was released, he also quit and was replaced by Charles Gavin. From that moment on, the band would only loose but not gain any new members. In 1992, Antunes left Titãs to pursue a solo career. In 2002, Fromer died when a motorcycle rammed him at Europa Avenue, in São Paulo. Half an year later, Reis also left the group to focus on his solo albums. The most recent change was the departure of Gavin, in 2010, due to personal reasons. Since then he was replaced by a session drummer.

The band has released their latest album in June 2009, titled Sacos Plásticos (Plastic Bags). The first single from the album was "Antes de Você" ("Before You"), and it received radio airplay on May 7. The second single was "Porque Eu Sei que É Amor" ("Because I Know It's Love") and it reached #16 at Brasil Hot 100 Airplay.

Most of the band members met at Colégio Equipe in São Paulo at the end of the seventies and, after their first live performance at the school itself in 1981, the band began to perform live in several night clubs around the city. The first formation was: Arnaldo Antunes (vocals), Branco Mello (vocals), Marcelo Fromer (guitar), Nando Reis (bass), Paulo Miklos (sax and vocals), Sérgio Britto (keyboards and vocals), Tony Bellotto (guitar), Ciro Pessoa (vocals) and André Jung (drums). It was a pop/New Wave-styled band, with a rather conventional sound and odd looks, with tender and little ball neckties. In 1984, without Ciro Pessoa, who left over a disagreement about André Jung's drumming skills, the band signed with the WEA label to record their first album, Titãs, produced by Pena Schimdt, and featuring songs previously recorded with Pessoas's vocals. Although poorly promoted and hardly a success, the band spawned their first hit: "Sonífera Ilha", later recorded by singer Moraes Moreira.

In 1985, with Charles Gavin replacing André Jung on drums (the latter going on to Ira!), their second album, Televisão, produced by Lulu Santos, was released with tighter arrangements than their debut album. Not only was the title track a great hit, the album was more heavily promoted than the first one and brought more opportunities to the group.

In November 1985, Tony Bellotto and Arnaldo Antunes were arrested for heroin traffic and transportation.[7] The episode made so much of an impact in the band, the next album, Cabeça Dinossauro, released in June 1986, contained a lot of tracks criticizing the public institutions ("Estado Violência" and "Polícia"), as well as other "pillars" of the Brazilian society and indeed society in general ("Igreja" and "Família"). The heavy and punk-influenced rhythms and the forceful lyrics, characteristic of the band in this phase, are fully represented in this album which is considered by the critics one of the best works of the group and one of the landmarks of the Brazilian rock.

Jesus Não Tem Dentes No País Dos Banguelas, released at the end of 1987, continued in the same vein as the previous album in tracks like "Nome aos Bois", "Lugar Nenhum" and "Desordem", however adding samplers in tracks like "Corações e Mentes", "Todo Mundo quer Amor", "Comida" and "Diversão". After some international performances, the band recorded some of their hits in live Montreux Festival and released Go Back in 1988. The biggest hit to come out of Go Back was a live version of the song "Marvin" which is a re-invented version of "Patches" by Dicky Lee made famous by Elvis.

The producer Liminha (a former adjunct member of Os Mutantes) was always an important associate of the band since Cabeça Dinossauro, and this association arrived to its climax in Õ Blésq Blom, one of the most popular productions of the band by that time. Some of the prominence tracks: "Miséria", "Flores", "O Pulso" and "32 Dentes". One of the prominent features of this work was the special guest appearance of a couple of improvisors, called Mauro and Quitéria, discovered by the band in a beach in Recife.

The band had arrived to a decisive point in its history and the next album, Tudo Ao Mesmo Tempo Agora mark a strong yaw at the musicians' style, searching for heavier, alternative and authorial sound, along with scatological lyrics. The members themselves produced the album and the work was possibly the final reason for Arnaldo Antunes to leave for a solo career. The following album, Titanomaquia, in 1993, continued the previous work in a way, with heavy instrumentation and aggressive lyrics, only now produced by Jack Endino, producer of important bands like Nirvana, which contributioned for the grunge-influenced sound.
Sites:
titas.net, Facebook, Twitter, instagram.com, YouTube, Wikipedia
Members:
André Jung, Arnaldo Antunes, Branco Mello, Charles Gavin, Ciro Pessoa, Emerson Villani, Marcelo Fromer, Nando Reis, Paulo Miklos, Sérgio Britto, Tony Bellotto
Variations:
Viewing All | Titãs
Titas, Titâs