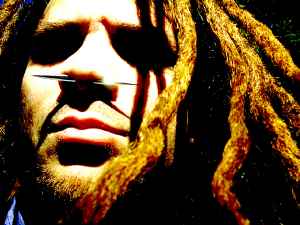 Real Name:
Steven R. McClure
Profile:
From small dark clubs to massive outdoor festivals, always turning it out - it is here where you, the subterranean public may encounter The Monk. The Mack-Of-All-Trades, DJ/producer/artist and overall hustler of culture. Banging out a soundtrack of underground party music that jumps from hard house and breaks to slamming disco-tech, and twisted techno, to drum & bass rinse-outs, the dreadlocked Monk punishes the crossfader as he works one record against another in a style that owes more to hip hop than to conventional club DJ'ing.
As one of the Founders of Rabbit In The Moon, Pimp Juice and Hallucination Records, Monk is a corner stone of the Southeastern U.S. Scene and has established himself as a devoted player in the Electronic Music Industry worldwide. Best known for his early work and collaboration with Confucius in the collective Rabbit In The Moon and as the opening DJ to the RITM live show for over a decade (1992-2002), Monk is breaking new ground with several new innovative audio-visual projects.
Monk is known for his versatile DJ sets ranging from his traditional hardbangin' house -vs- funky breaks style with a touch of drum & bass & hip hop, to a deeper "Dark Side Of The Monk" set that leans toward a darker tech-house meets tribal & disco house style. Voted in BPM magazine as receiving the "most fan email nominations" in the US and one of Americas Favorite DJ's (March 2003), Monk has forged his place in the underground dance community.
Sites:
djmonk.com, hallucination.com, Facebook, SoundCloud
Aliases:
DJ Punk Rock, Steve McClure
Variations:
Viewing All | DJ Monk
DJ Monk (S. McClure), DJ Monks, Monk, Monk (S. McClure), Rabbit In The Moon, Steve McClure, The Monk, The Monk Of Rabbit In The Moon