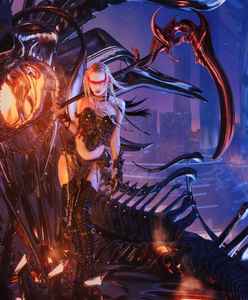 May 17, 2022
It'll be interesting to watch how Claire progresses with her music. It took me a while to get to like Grimes. I watched the hi-prod videos, all the blood, seemingly scary, but somehow anaesthetised, exaltingly beautified whether Versailles-type gowns or sci-fi monsters hybridised with faeries. Kind of a feminist girl’s take on violence and society in a mash-up of cultural references. (Girls have to play strong and compete in a “patriarchal” world – oh really, do they?)

I continued to listen to her high voice – what is she doing? No doubt, there is a place for all types of music, but there was something frustrating here. I don’t like saying it (because honest: pop isn’t my core taste), I couldn’t fight my gut, I kept thinking with a bit of ‘reigning in’ and STRUCTURE, she could creates some devastating hard core pop. (Like yearning Diamanda Galas would sing a beautiful song just for once, because obviously she has buckets of talent, the technique is mastered.)

It’s not for the listener to dictate what an artist should do, but it can be frustrating. Anyway, at some point, Grimes latched on and I started to like the music. The Music . . . .

She has said she loved her crazy punky side and wishes she hadn’t been exposed to pop culture (as though it bleeds into her craft, affecting it, but she is the artist and needs to filter it herself, it’s up to her what she produces . . . can you really have too many influences?). The musical production, technique, creativity, 'VISION' is all there. But often, in terms of structure, it seems Grimes is kind of wedged between electronic soundscapes (Kraftwerk) a wallpaper of sound; and the more strictly structured, VERSE-CHORUS form pop (with ‘liberating’ elements of indie, punk and other genres). Claire is a bit like a blender. Taking everything around her, processing and then producing a milkshake. A bit more attention . . .

The admitted speed and acid explains a lot. Once the acid is taken it is always there, it’s done its bit, maybe continues too, so whatever words of ‘denouncement’ which follow, well, the vision seen will never be unseen. The viscera, skeletons and skulls – visuals common to speed and acid, raw ingredients of life. Drugs can break things down into component parts, it’s then left to the individual to piece things back again, hopefully toward a more rigid structure.

The history of the drugs is there, then following, are denouncements of such hard drugs (could be pressure from the establishment / music marketing system – bucks are involved). Claire has also stated her music is “ADD music”, ah, well, the drugs might only be part of it then, ADD, and how you focus on reality and writing music with a hyperactive mind, maybe that is why she stays on the frenetic side of music, and doesn’t venture into the more disciplined verse-chorus narrative of pop.

It seems artistically Boucher’s mind is a huge warehouse, full of ideas. Very often with musicians their first work is their inventive best. Hate to be conventional here, but I am hoping that is not the case with Claire and that we see more form in her music, coupled with clear, evolved lyrics as she obviously has things to say. Her track New Gods demonstrates exactly what I mean. It takes all the whacked out beauty of her visions, but gives the song a magisterial form. In liking this I am not denying the relevance of former work.

January 16, 2022
Albums 1 and 4 are stunning and then it goes all pop pop popular which is great for her bank balance but sadly not for my ears....

January 26, 2016
I'm usually a fan of metal, ambiance, and post-rock type music. I've tried to get into pop music a few times and it never sticks, it's always too vapid, or shallow, or formulaic for me. Grimes is the first "pop" artist that I've really, really liked and wanted more of.

Highly recommended if you want something poppy, but interesting, pretty deep, and different from the AAA Hollywood crowd.
See 1 reply