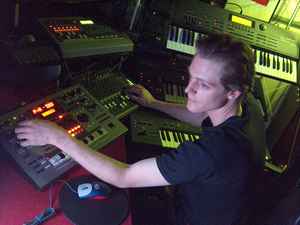 Real Name:
Patrick Marek
Profile:
Swiss native composer and producer with Slovakian blood. Born in 1973, he started to play guitar at 5, to compose his own guitar pieces at 8 and entered music conservatory at 10. He studied music theory and classical guitar at the Geneva's university of music, sociology and musicology at the University of Fribourg. As a student, he started to produce electronic music and built his first studio early 90' in Geneva. He moves to Berlin in 2006, to Zürich in 2007, to Vienna in 2014 and back to Zürich in 2017.
Sites:
mx3.ch
Aliases:
D.A.R.R.Y.L., Johnny Feyd, Kohtek, Marek Douglas, MDK (2)
In Groups:
Pat & Jiam, Skyline
Variations:
Viewing All | Patrick Marek
D. Paez, P Marek, P. Marek, P.Marek, Patric Marek