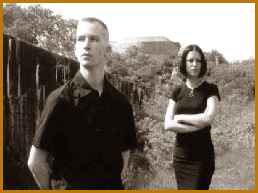 Profile:
Officially formed in 2000 by JD Tucker, Grendel was quickly picked up by the legendary German label NoiTekk (a subdivision of Black Rain Records), upon hearing their first promo CD. This promo included the club hit “Strangers” and, after additional production & mastering, would become their 2001 debut studio album, “Inhumane Amusement”.

After a year of touring & studio work, the “End Of Ages” EP was released and soon became a staple track for DJs world wide. This was shortly followed up in 2003, by the second full length album “Prescription Medicide” album, which saw the band truly entering the limelight, becoming album of the month in many magazines such as Orkus & Zillo, reach top 5 positions in prominent underground charts, including Deutsch Alternative Charts and number 1 for several months in the Dutch Underground Charts. With the success of this album, the band did extensive touring throughout Europe & North America.

In 2005 Grendel released their now classic “Soilbleed” EP, of which the title track is to this day an unmissable club hit worldwide. This release marked a true milestone in the band’s career and saw them touring larger stages throughout Europe, reaching a far greater audience, and topping alternative & sales charts. The EP was re-released in 2006 as “Soilbleed Redux” and featured additional material, such as a cover of Leaether Strip’s “Don’t Tame Your Soul”, “One.Eight.Zero” and a remix by New York artists Life Cried.

In the meantime, Grendel started working on their third full length album, entitled “Harsh Generation”. This was to become one of the most important & influential albums for the contemporary industrial & Electronic Body Music movement, marking new territory and a more matured sound & style. After it’s release in 2007, it remained on top positions of alternative charts, such as the DAC, GEWC, DUC for maximum periods of time. To this day, this is also an unmissable part of any industrial/ebm DJs arsenal. Due to the success of this album, Grendel spent the following years touring extensively & intensively worldwide, drawing increasingly larger audiences.

Eventually, in 2009, the "Chemicals + Circuitry" EP was written & recorded. This turned out to be a slight diversion from the band's familiar sound, but received much praise and again reached top positions in the charts (DAC, GEWC, DUC, etc.), with the title track quickly becoming a favourite amongst DJ’s and listens alike.

This success would prompt a rework of the song on their following album, “Timewave Zero”, in 2012. Although returning to a more familiar sound, it would take on influences from a variety of contemporary dance music, such as trance, electro and house. This, again, would mark a big milestone in the band’s progress, branching out from familiar ground and reaching a wider audience. Much praise was given for this and it would gain not only top chart positions, but also high sales.

And most recently, in 2012, Grendel released the "Timewave : Zero" album. This album is both a return to their signature sound and taking on various influences from contemporary EDM styles, such as Trance, Complex Electro and House. All of this together has created the most mature Grendel sound to date and has gained highly positive feedback from both fans and media, scoring top positions in the DAC, GEWC, mail order sales charts and more. In the years that followed, Grendel toured extensively on the success of this album in both Europe & North America.

During this period, JD moved to the UK in order to pursue various endeavors & career moves, where he became heavily influenced by the rich music, art and fashion culture of London. This resulted in a more refined and mature style, both musically and visually, incorporating his love for both contemporary and old school music of various genres.

After much hard work, October 2017 marked the release of the eagerly awaited album, “Age Of The Disposable Body”. Not only did this album offer a rich palet of sounds & styles, but also a huge step forward vocally and lyrically, marking a new chapter in Grendel’s evolution. This album focussed on the contemporary political situation in both Europe & North America, regarding populist politics & the cult of personality. It also saw guitarist Emanuelle Trinci involved in the creative process and guest appearance by Seamus Bradd of The.Invalid. The album received critical acclaim & praise from both fans and press alike and reached top 5 positions in both sales & DJ charts. To promote the album, Grendel embarked on an extensive 34 date tour of North America and played major festivals across Europe. This tour would see both Neal Read & Erik Gustafson join the band and Grendel taking on the form of a full creative line up.

During the time after the North American tour, JD continued working on his music, exploring new musical avenues, and spent time reflecting on recent events in his life, which resulted in the 2019 release of the “Ascending The Abyss” album. The title of the album refers to facing challenges in life as a rite of passage. Erik Gustafson became involved in the recording process, with guitar taking on a more prominent role. Musically it showed Grendel taking a more mature approach to their music and expanding on the new direction set by “Age Of The Disposable Body”.
Sites:
grendel-hq.com, Facebook, instagram.com, Twitter, grendel.bigcartel.com
Members:
4N1T4, Erik Gustafson, FLRS, Jos Tucker (2), M4RC, Marco Visconti, Mel Allezbleu, Neal Reed (2)
Variations:
Viewing All | Grendel
[Grendel]