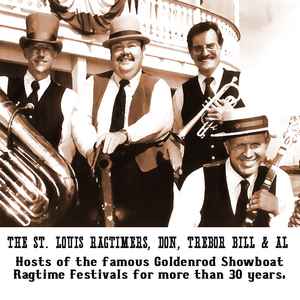 Profile:
This exemplary American group helped to preserve the Ragtime and Traditional Jazz genre. They hosted the internationally famous Goldenrod Showboat Ragtime Festivals on a restored showboat moored to the St. Louis Levee for decades. Each of the band members was a musicologist as well as musician which allowed them to present entertaining histories for each song. Some of the legendary African American performers attended and performed the Festivals providing inspiration for all the modern performers. Trebor Tichenor, founding member of the group (piano) had a nationally syndicated public radio show called "Ragophile." The group has performed often at the Scott Joplin residence Museum in St. Louis. The group started as a trio, but soon added one of the greatest cornet players of the 20th Century, Bill Mason. Over the years, they have sometimes addedl clarinet players, a drummer or two and a reserve tuba player. They were often joined by St. Louis singer and piano legend, Jean Kittrell. But, the basic 4 man configuration with Trebor, Don, Al & Bill has survived as the defining ensemble. They gave a series of performances at the Sheldon Concert Hall to their aging but loyal fans in St. Louis, commemorating their more than 50 years as a group. Please notice that their LP Vinyl Albums and the later CD Compilation titles are the same but the recordings and songlists are completely different. Nearly all the songs on the LP Volumes were studio recordings (mostly at Technisonic in St. Louis county). The CD volumes are compilations from various live performance or location recordings attributed to George Buck (GHB Jazzology) They later produced several CDs on their own labels: Ragophile Label by Trebor Tichenor (piano) and Stomp Off by Eric Sager (clarinet). Don Franz (Tuba) also helped produce the (very rare) big Vinyl LP box set of various performers at their Goldenrod Showboat Ragtime Festival.
Sites:
stlragtimers.com
Members:
Al Stricker, Bill Mason (4), Don Franz, Ed Fruend, Eric Sager (2), Trebor Tichenor
Variations:
Viewing All | St. Louis Ragtimers
The St. Louis Ragtime Band, The St. Louis Ragtimers

April 25, 2021
As someone who has archived a great deal of their material, I would recommend the "Full Steam Ahead" LP. Although, the magic that happened when these gents got together, never gets old. Why are they special compared to many of the revivalists and their peers from the 70's and beyond? They managed to always sound closer to Traditional Jazz or authentic Riverboat Jazz than most of their contemporaries. Along with some of the other "white" groups playing selections from America's historic period of minstrel performers, they had nothing but the greatest respect and regard for the foundations of all this jazz and the artists who created it regardless of race.