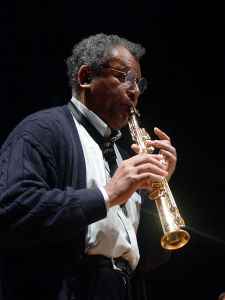 Real Name:
Anthony Delano Braxton
Profile:
Born 4 June 1945, Chicago, Illinois, USA. Influential experimental composer and saxophonist. Member of the AACM where he was influenced by mentors Muhal Richard Abrams and Roscoe Mitchell and friends Joseph Jarman, Wadada Leo Smith and Leroy Jenkins, among others. In 1969 Braxton recorded For Alto, the first full-length album for unaccompanied saxophone. To date, Braxton has composed over 350 compositions, many titled with diagrams rather than words.

Braxton plays the sopranino, soprano, C-melody, F mezzo-soprano, E-flat alto, baritone, bass, and contrabass saxophones; the E-flat, B-flat, and contrabass clarinets; and the piano. He is John Spencer Camp Professor of Music, Emeritus, at Wesleyan University in Middletown, CT. In 1994, Braxton was awarded a MacArthur Foundation "genius grant". In 2013, he was named a 2014 National Endowment for the Arts Jazz Master.

January 30, 2019
get the iridium box set if you have to kill your mother to get the money

The MULTIPLE ORCHESTRA(L) works possibly rate with Stockhausen's except in both I was disappointed that variety seemed to be used at the expense of density which, to me, would seem the most advantageous use of such a preposterous logistical enterprise as such scores (for MULTIPLE ORCHESTRAS) demand.
I intended to discuss Braxton's fun String Quartet(s) from 1971 which, apparently, is not listed herein.
Obviously, Anthony Braxton is a total genius and paladin misfit, possibly the most 'third stream' ov any composer, that is, as native to the AUTHENTIC jazz idiom AS TO the classical, reaching toward neither but existing equidistantly. Braxton's string quartet, as performed by the Robert Schumann String Quartet in 1971, is highly plastic in form, although not (really) through-composed as glimpsed by the (all prose) 'score' depicted on that album's cover.
The Quartets are framed by alto sax solos by the composer; if they weren't so inspired I would suggest it was FILLER for the String Quartet agenda, with said solo sax pieces being sequenced interstitially between the quartet pieces, not necessarily to their benefit. This possibly tames Zorn's string quartets but I do not hav the grey matter to currently assert that.
I find that some of Braxton's latter-day improvisational ouevre lacks conviction, especially in the opening bars of a typical recital, in which the music seems to almost reticently coalesce, rather than explode into existence as in Mclaughlin's best early work; this defecit augments the appeal of his String Quartet which bursts forth and is as versatile and capricious as the improvisation but enjoys the tangible clarity of RESOLVE in its sounding.