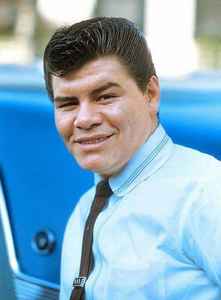 Rock and roll pioneer and a forefather of the Chicano rock movement, Valens' recording career lasted only eight months. During this time, however, he scored several hits, most notably "La Bamba", which was originally a Mexican folk song that Valens transformed with a rock rhythm and beat that became a hit in 1958, making Valens a pioneer of the Spanish-speaking rock and roll movement.

On 3 February 1959, on what has become known as The Day The Music Died, Valens was killed in a small plane crash in Iowa, a tragedy that also claimed the lives of fellow musicians Buddy Holly, and J.P. Richardson (aka the Big Bopper).

Would Rhino records please reissue Ritchie Valens 1959 a lot of people would buy it.