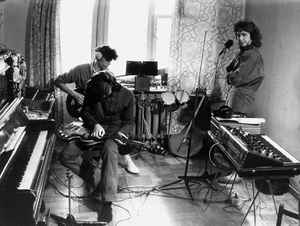 Profile:
Ambient/experimental band from Izhevsk, Russia, whose sole release was Legkoe Delo Holod (1991), reissued in 2001 by Izhitsa Records with additional remixes and in 2015 on an LP by MiruMir.
The founders of the Izhevsk electronic/experimental wave in 90s. Despite the fact that the group did not give a single concert for its short existence, they had a great influence on a local scene and DIY culture. Stuk Bambuka was widely known after releasing two music videos (Snezhniy Med and Le Cheval De Ma Vie) for a Russian art contest. The band broke up in the early 90s after the singer left it.
Various members later went on to work with completely different Burunduk Quartet and Soda