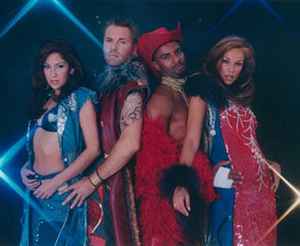 Profile:
Brooklyn Bounce is one of the many pseudonyms of Matthias Menck and Dennis Bohn, two House DJ's from Germany.
With their project "Brooklyn Bounce" they received gold and platinum records all over the world and they rank along side artists such as Scooter and 666. Menck and Bohn work solely in the studio and are not part of the Brooklyn Bounce live act. Instead, the group was fronted by several different vocalists and dancers, who have collaborated with the two German producers throughout the years. The list includes René "Diablo" Behrens who was also the front person of 666, Ulrica Bohn who is originally from Sweden, Gothenburg but married with Dennis Bohn since many years, Alejandra Cuevas-Moreno and Stephen "Damon" Zschope.

December 27, 2011
For me, as they say, this group, are one of the most popular dance acts ever in electronic music history, the Brooklyn Bounce. There music is filled with dark and mysterious style dance trance tracks like The Progressive Attack Theme, Get Ready To Bounce, Take A Ride, The Real Bass, Contact, Canda! and Funk U. I don't know how these guys do it, but they surely have a taste for it to do it. This is there BB Style and for them this is there BB Nation. Thats all for now, Thanks.
Reply Notify me 2 Helpful