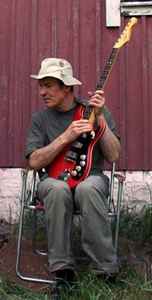 Real Name:
Keijo Virtanen
Profile:
Based in Jyväskylä, Finland, Keijo Virtanen is somewhat of a legend in the whole finnish psych scene (on the same level as Pekka Airaksinen - in fact the two have collaborated before). He’s been working on music for ages but his work has only been starting to get attention during the last few years. This artist’s music is unlike any other, it is often based in ambient and drone and incorporates weird traditional folk instruments from around the world just as much as electronic instruments… and then you’ve got the voice. Keijo is renowned for his throat singing skills which truly sound alien-like and fits his drones very well, giving them an even weirder feel. And when he’s not throat singing and actually forming words, his strong, nasal voice makes any of his songs bizarre beyond description. His roots and influences are quite obvious (traditional world music, american appalachian folk, jazz and drone), but what he does with them makes his work extremely unique. He is sometimes joined by members of free-jazz outfit Vapaa (going under the name Keijo & The Free Players) on some recordings.
Also he collaborated with Tiitus Petäjäniemi of Vapaa, Robert Horton, Avarus and Kheta Hotem.
Sites:
personal.inet.fi
Aliases:
Keijo Virtanen