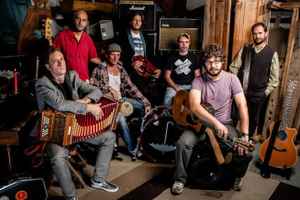 Profile:
L'Orage, the name comes from a song of Georges Brassens, is a group of Italian folk rock born in Valle d’Aosta, a small region in the North-West of Italy. The group was founded in 2009 as a project by Alberto Visconti and Remy Boniface, the latter member together with his brother Vincent Boniface were already part of the group Trouveur Valdoten.

The band, after the release of the first album named “Come una Festa”, won different prizes. The most important are: in September 2010 the "Miscela Rock Festival", in December 2011 the third edition of "The Best of Demo 2010/2011" and in 2012 “Musicultura” where they won not only the first prize but also the plate from the critics and the award for best music. In 2012 the second album La Bella Estate was released.

On 1 May 2014 the group participate at the “Concerto del Primo Maggio” with songs "Mi Manda in Aria" and "Satura".

In November 2014, the bassist Stefano Trieste and percussionist Ricky Murray left the band. Trieste is replaced on bass first by Marc Magliano and then by Luca Moccia.

In 2015 they released the fourth album Macchina Del Tempo and the video of "L'Orage", the song of Georges Brassens from which they took the band name. In this video also appear: Enrico Greppi, lead singer of Bandabardò, poet Guido Catalano and the burlesque artist Cecilia Radica.