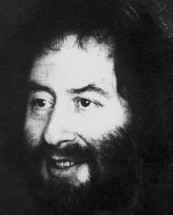 Profile:
Basil Kirchin (August 8, 1927 - June 18, 2005) was a British drummer and composer. His career stretched from playing drums in his father's Big band at the age of 13, through scoring films, to experimenting with the manipulation of recorded sounds which has seen him cited as "the father of ambient music".
Basil Kirchin's debut was at the Paramount, Tottenham Court Road in London in 1940 where he played drums in the popular dance band led by his father Ivor. After the war, Kirchin played with Harry Roy and Ted Heath but returned to work with his father in the Kirchin Band in 1951. The band continued to enjoy success with the likes of Billy Eckstein and Sarah Vaughan insisting that the Kirchin Band backed them when they toured Britain, their shows would break attendance records and they featured in Melody Maker polls. The band recorded for Decca and Parlophone with the latter being produced by George Martin. Kirchin was able to record the bands live performances. By 1957 the rise of Skiffle and Rock and Roll had brought an end to the Big Band era and Kirchin had decided it was time to move on "because you're a prisoner of rhythm. And I was fed up playing other people's music.".
A decade before it became fashionable Kirchin went to India and spent five months in the Ramakrishna Temple. He then moved to Sydney but as his possessions were being unloaded from the ship a strap broke and everything, including his recordings of the Kirchin band, was lost beneath the sea. This loss would trouble him for the rest of his life.
In 1961 he returned to Britain and worked with Keith Herd on experimental pieces "soundtracks for unmade films". He also produced material for the De Wolfe library using the talents of young session musicians like Jimmy Page and Mick Ronson. In 1967 the Arts Council awarded him a grant to purchase a Nagra tape recorder. This he used to collect ambient sounds, animal noises at London Zoo and the voices of autistic children. Kirchin experimented with slowing down the recordings to reveal "Little boulders of sound". "Take birdsong, all those harmonics you can't hear are brought down -sounds that human ears have never heard before.".
His experimentations were partly financed by composing film music for the likes of Catch Us If You Can (1965), The Shuttered Room (1967), I Start Counting (1969) with Jenny Agutter and The Abominable Dr. Phibes (1971).
His experimental pieces were released on two albums both called World Within Worlds. The first was issued in 1971: Worlds Within Worlds, EMI Columbia (SCX6463) and included Part I - Intergration 2. Part II - The Human Element. The second was not issued until 1974: Worlds Within Worlds Island Records (HELP 18} Part III - Emergence Part IV - Evolution. Kirchin was frustrated with the record companies meddling with his material. Neither recording sold well at the time but have since become highly valued collectors items.
He continued to compose throughout his life and his music was acknowledged by a new generation with the release of material by Trunk Records. Kirchin said "I wanted to try and leave something for young people who are starting in music and looking for something as I've been looking all my life".
Many musicians have since acknowledged the influence Kirchin had had on their own works. From Brian Eno and Nurse With Wound to Broadcast - "We need role models like Basil Kirchin to go forward, and as we can see parallels in his music and ours, hearing this confirms that we're doing the right thing".
Sites:
Bandcamp, MySpace, Wikipedia, theguardian.com
In Groups:
Harry Roy And His Orchestra, Johnny Keating And 27 Men, The Kirchin Band (Basil & Ivor), The London Studio Group
Variations:
Viewing All | Basil Kirchin
B. Kirchin, Basil Kirchen, Kirchen, Kirchin