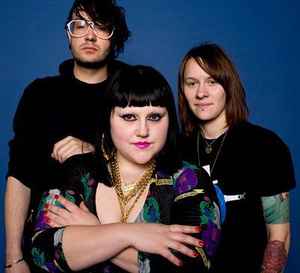 Profile:
Punk/Indie band formed in 1999 in Searcy, Arkansas, USA.
Nathan (aka Brace Paine), Kathy, and Beth proclaimed: "We started a band 'cause we were bored. Our mission is to make you dance, and if you're not gonna dance, just stay at home and listen to the oldies station".
They were highly visible due to their exposure in magazines like Out and The Advocate, where they became icons in the gay and lesbian indie rock community.
New drummer Hannah Blilie joined the band before they recorded 2005's "Standing in the Way of Control", which incorporated elements of dance-punk into their raw, urgent sound.
Sites:
gossipyouth.com, Bandcamp, Facebook, MySpace, Twitter, Wikipedia, YouTube, YouTube
Members:
Beth Ditto, Chris Sutton (2), Hannah Blilie, Kathy Mendonca, Katy Davidson, Mary Beth Patterson, Nathan Howdeshell
Variations:
Viewing All | The Gossip
GSSP, Gossip, Goxxip