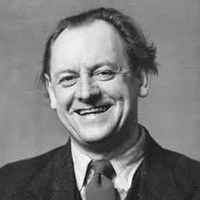 Real Name:
Kurt Schwitters
Profile:
Innovative German born artist who is probably best known for his collages and assemblages. He also made pioneering progress with sound poetry, and in that field is best know for his pieces "Ursonate" and "Anna Blume". Though initially associated with German Dada, he later started his own one-man movement Merz, and published a magazine of that name. With the coming of World War II, he fled Germany, unfortunately leaving behind his infamous Merz-Bau structure, which was completely destroyed. Fleeing first through Scandinavia, he finally settled in England, where he spent the rest of his life.

Through the years, Schwitters has been very influential, not only on visual artists, but sound artists ranging from Jaap Blonk (who re-recorded his poems) and Merzbow (who took his name from the Merz-Bau, though he later realized he misspelled the word).