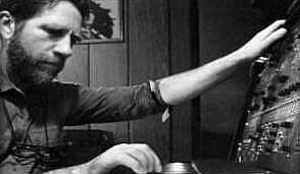 Zaffiri studied in Turin at the "Conservatorio G. Verdi", taking a diploma in composition, choral music and pianoforte, and subsequently in Paris Conservatory with Tony Aubin. He perfected his piano studies with Guido Agosti in Siena at the "Accademia musicale Chigiana".

In 1965, together with other operators in the visual field, Zaffiri set up the "Studio di informazione estetica" and started an interdisciplinary research into sound and visual phenomena. From 1970, Zaffiri turned his attention towards live electronic music performance in theatre and video.
In Groups:
Studio Di Musica Elettronica Di Torino
Variations:
Viewing All | Enore Zaffiri
Zaffiri