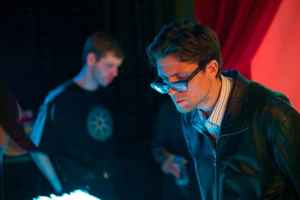 Real Name:
Дмитрий Васильев
Profile:
Dmitry Vasilyev was a self-taught journalist based in Moscow. For many years he was active in the local and international underground music scene, running the label Monochrome Vision since 2004 (and released over 50 CDs with experimental music from all over the world). He was also one of the jury members for the Prix Russolo international music contest.
His career began with the Independent Electronic Music magazine founded in 1995, which progressed from very small run fanzine to the professional edition within just four issues. He transformed the idea of reviewing music into podcast format, published over 230 radioshows covering many genres and names in the experimental music field. IEM podcast was the series of weekly radioshows, each one was devoted to the particular artist or label, and spreading the information through the web.
Also he was known as the concert promoter who organized a number of concerts and festivals for experimental music in Russia and Ukraine, for those he invited outstanding artists from many european countries since the year 2002 up to this his untimely death in September 2018. Monochrome Vision was expanded to one of the most active music distribution networks in Russia and worked directly with dedicated and innovative labels from all over the world.