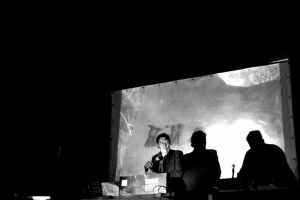 Profile:
Last Dominion Lost has existed since 1992, formed out of the ashes of Merge (a project created by Dominik Guerin, founding member of SPK, and Jon Evans). With the inclusion of John Murphy (ex-SPK, Whitehouse, Current 93, Death in June), the transition was complete. In April of 1992 the recording sessions for what was to become „The Tyranny of Distance“ began (released on Germany's Tesco Records). 16 years later, the opportunity arose to reform the slumbering project. With the welcome addition of Ash Wednesday (Crashlands, Einstürzende Neubauten) and Julian Percy (Ratbag) initial recordings and rehearsals began in May of 2008. In November of 2015 Till Brüggemann (Gerechtigkeits Liga, Krank) joined LDL.

Having not appeared on any recordings since the first album released in 2004 and originally recorded in 1992, it was announced in May 2018 that Dominik Guerin aka Tone Generator (of SPK) rejoins Last Dominion Lost for the September Scandinavian tour and as full-time member for new recordings.
Sites:
Bandcamp
Members:
Dominic Guerin, John Murphy, Jon Evans (3), Julian Percy, Till Brüggemann