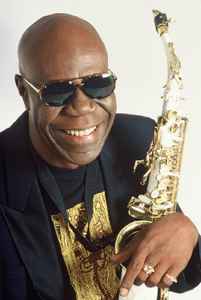 July 21, 2021
One of the best African musicians par excellence! I remember a DJ giving me the 12'' singles 'Big Blow" and 'Soul Makossa' in the late 1970's. He made so mcc memorable music.
Reply Notify me Helpful

February 15, 2021
The great musician of the world! RIP Manu Dibango the King!!
Reply Notify me 2 Helpful

September 18, 2020
RIP Manu Dibango the King of Makossa Soul and others!!
Reply Notify me 1 Helpful

Gilles Peterson's radio show was on tonight and my ears pricked up when I heard several of Manu's records being played. Very sad to hear the news. He was the greatest. I always buy Manu's records whenever I find them.
I met him and his band before his gig at Ronnie Scotts. Of course it was a great night! I was in the bar downstairs having a drink and Manu and the band walked in. We chatted and I got a photo of myself and a beaming Manu. I asked if he would be good enough to sign a record and he said ok so I rushed upstairs to the cloakroom and pulled out O Boso from my record bag. He looked at it and pointing to the band and the photo on the back of the record, said still with the same musicians in the photo over 30 years later! He signed it "Souvenirs souvenirs!!! That's a long time All the best. M.Dibango. Londres 30.10.003." It is my most treasured album.

March 24, 2020
Rest in power Manu! You're one of the greatest that ever did it on the afro jazz scene! To me, you remain one of the most enigmatic staple legend of all time on the world jazz scene! From a great fan of yours, your legacy will live on <3
Reply Notify me 1 Helpful

March 24, 2020
one of the first BIG dance tunes of my youth was ‘Soul Makossa’ in 1972. It was played on repeat in clubs and the radio in Belgium, France, everywhere. And it still packs floors. Such a timeless Afro-groove, what a great musician Manu Dibango was. But he was never a 'one hit wonder' although 'Soul Makossa' remains his biggest hit. As musician he always kept his radar on the groove and new sounds of the ever changing music scene. Like his collaboration with Chateau Flight for the single Soul Fiesta. And who knows the soundtrack ‘How To Make Love To A Negro Without Getting Tired’ from 1989?

So sad to know that he is the first musician to die from the Covid-19 virus. Such a loss. RIP

March 24, 2020
My main man for a long time. Shaped the musical landscape in a genuinely unique way. There was no other. Worst C-19 news yet.
Reply Notify me 2 Helpful