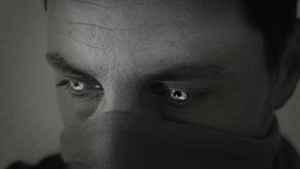 Maurice Pinkster was one of the many young men who were inspired to start their musical journey from there: Infected by the house music of the time (which meant all kinds of electronic dance music then) he started buying records in his hometown Dordrecht, which further fanned the flame of his passion and instilled his urge to become a producer himself. In the following decade he became a pioneer of the industrial hardcore sound under The Relic moniker, which is still going strong.

It’s from Dordrecht where he now operates the widely acknowledged Dark.Descent label (with its four distinct sublabels) – and the multi-facetted Cubic Nomad project, a perfect outlet for a creative spirit: From industrial technoid dance floor killers like the very first Cubic Nomad track “Holy War” to a wider scope of sounds and influences from techno, trance, IDM, big beat, ambient and hardcore, all can be found in the Cubic Nomad universe. The two albums “Light Errant” (from 2011) and “Forgotten Grounds” (from2013) are filled to the brim with concise rhythm programming, techno beats and a trademark industrial flavour, giving Cubic Nomad a distinct identity. Tracks like ‘Walker’ and ‘Paradox Lost’ have become a permanent fixture of many DJs’ inventory.

But there’s yet another face of Cubic Nomad to be discovered: The downtempo, glossy electronica with occasional trip-hop style beats as unveiled on “Earth 2” (from 2012) and “Manta” (from 2014) who were both released on the Dream machine label: A call for eco-awareness, a dip into the manifold submarine world, and a tribute to beauty.