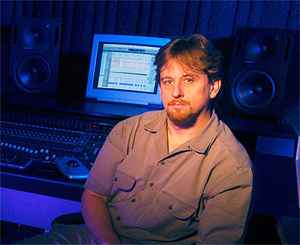 In the fall of 1993, James Paul Sain took a residence at The Royal Swedish Academy Of Music as part of the Swedish-American Exchange program. He returned to work at the Elektronmusikstudion two years later and initiated the "Recontextualization of Granulated and Concrete Sonic Resources" project at EMS, which was awarded a Bicentennial Swedish-American Exchange Fund grant. Sain also organized and curated a concert of American electroacoustic music at the German Institut für Computermusik und Elektronische Medien in 1998.

Sain participated in the cooperative interdisciplinary project to develop 'MIDI Movement Module' (M3), an alternative controller for dance. In 1994, he presented a techno-ballet Ender's Game at the University of Utrecht. The M3 hardware received an Award for Technological Innovation in Sound (1998) from the editors of Discover Magazine.
Sites:
jamespaulsain.com, arts.ufl.edu, societyofcomposers.org, societyofcomposers.org