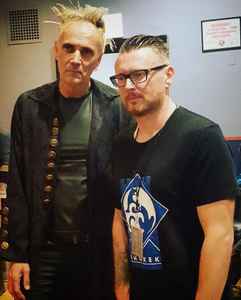 September 19, 2022
There's around 80 minutes of unreleased material dropped across all the recent Metropolis re-issues of the first 7 albums. Beautiful music, but feels completely out of the context of these albums and breaks its flow. Would be nice to have these tracks as a separate release or as an extra bonus disk to the re-issues, and each album would fit on 2LP with etched side D then.
See 1 reply

April 30, 2020
Could we possibly get some reissues on vinyl for Semantic Spaces, Karma, & Poem? Those seem to be the most commercially successful. I personally would love to see a vinyl box set of all the ambient albums that preceded Semantic, but I’m sure that would be more challenging to sell through than the other three albums I mentioned. Nettwerk, if you’re listening, please give us Delerium on vinyl!
See 8 replies

March 9, 2008
Delerium's ambient days were the best of their career. In the early nineties they produced massive, long, and mindblowing ambient music that was very atmospheric but dark. These albums were not as popular as their later Karma and Poem, but they were significantly less commercial, as both Karma and Poem featured Kirsty Hawkshaw and several other vocalists. Their style turned from dark ambient to an electronic pop music, but fans of both styles can appreciate their diversity. Personally, I preferred their older sound, but their new sound ushered in a new wave of electronic music fans, and the anthems of Silence and Innocente received much worldwide airplay.

One may define the stile as a chill-out, referring to the BPM, beat and used sounds, half electronic, half live. But the mood of the Delerium’s music won't let you to chill, 'cause it's uneasy, disturbed. Poets may say it's above the styles. This one may be the soundtrack to apocalypses.
Delerium's music may be compared to the sound of Orbital, but less melodic, more stress is made to the beat and unfocused disturbed prolonged sounds. The mood is almost the same through the most albums, every track is trying to express another part of an endless universe of sorrow, uneasiness and eternity.

Delerium should please the fans of old-school Enigma, the ones who fell like orphans ever since the shift Michael Cretu decided to give his music after "Voyageur" was released.
Their pre-1994 material is a pretty much darker goth electronica, but from "Semantic Spaces" on they found their way by mixing gregorian and tribal chants with synth beats and gorgeous female vocals.
Delerium became really known in wider audiences after the release of "Silence", song that featured Sarah McLachlan vocals and counted on various DJ remixes, including Tiësto, Airscape and Fade.