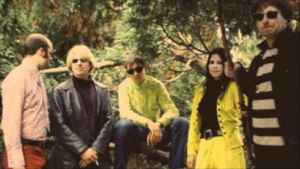 Profile:
Val's Basement were a Garage-Psych revival band from the East London / Essex area. Active during the 1990's, the band were a prolific live act, playing many shows on the London 'Mod' scene of the time and were closely associated with scene-leaders The Clique. The band featured an ever-changing line-up, but the mainstay members were Scott Copeland on guitar and Danny Maidens on drums. Trevor French - later of The Clique - was the original lead singer.

A demo tape exists of early live favourites like 'Lies', 'Peppermint Dreaming' and the epic set-closer 'Black and White Garden' featuring Copeland and Maidens with Mark 'Davo' Davenport (vocals), and Kevin White (bass). This line-up split in 1994 after a gig at 'The Volunteer' pub (in Barking, Essex) with White going on to replace Jason Hobart in The Aardvarks.

The band subsequently recruited David Abrahams-Edley (aka 'Dave Tetley', ex-Threads, ex-Yellowcayke) on guitar and Anja Bungert (ex-Thee Cherylinas, later in The Loons as Anja Stax) on bass, alongside Copeland, Maidens and Davenport. This line-up recorded sessions at East London's 'Toe-Rag' studios with Liam Watson, including the heavily psychedelic 'Spiralaena', a song previously recorded by Yellowcayke in 1989. This line-up also performed a song called 'All Along the Heathway' - a paean to the joys of living in Dagenham!

The two singles were made by a late line-up of the band, still featuring Copeland and Maidens with Graham Mansfield (ex-Liberty Takers, subsequently a solo artist) on bass and John Higgins (later in Sister Chain and Brother John) on vocals.

After the band ended in the early 2000's, Copeland formed the band 'Gas Mach V' as well DJ-ing many a 60's club night. He also compiles a 60's music show for Phoenix FM in Brentwood. Danny Maidens teamed up with Laurence O'Toole in his band Hypnosis and the pair then went on to play briefly in Sun Dial before subsequently forming The Sonic Jewels.
Sites:
YouTube, MySpace
Members:
Anja Stax, Danny Maidens, David Abrahams-Edley, Graham Mansfield (2), Kevin White (11)

August 28, 2019
hiya, I have every rehearsal tape and some other stuff , all handwritten lyrics and posters etc plus some live gig stuff too , Not in contact with any off them now except Anja now and then .

June 26, 2017
I saw this band play live multiple times in the mid-90's, mostly in Romford, Essex, but also in London. I always enjoyed their driving 60's 'Garage' sound and thought they deserved more attention. Certainly, the line-up with Tetley and Anja had real potential both musically and visually and I would personally like to see an archive release documenting their recordings. How about it Scott?