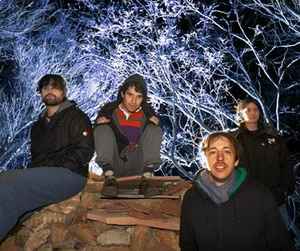 In the early 2000s, before naming themselves "Animal Collective", the members of the band made few albums under their stage names.
The albums they made, are nowadays considered to be part of Animal Collective's discography. And have since been re-released under the name Animal Collective.

These two albums were later re-released as a double CD under the name Animal Collective.

September 5, 2020
Back in May 2004 I was presenting a radio show for a four week station set up for the Brighton Festival. The producer of the show had fixed up Animal Collective to come in for an interview. Sung Tongs had just come out. I didn't know anything about them but the interview went ok. We asked them to play an acoustic track live for us.

They proceeded to play a song which went on .... and on ..... and on. At one point I thought we were going to crash the news and bump into the next show. As they played they stomped their feet and gradually everything in the studio that wasn't nailed down started bouncing around. Things were jumping off shelves and crashing down. It culminated in the large sound baffles that were set up around the musicians toppling over. They managed to stop the song about a minute from the hour .... whether by luck or judgement, I don't know. Just giving me time to thank them and end the show. Made it all sound quite professional.

I think they may have been on acid but I don't know for sure. It seemed likely. I wish I had a tape of that long song they played but, as with most of my transmissions, it has been lost.

February 26, 2020
Not sure what's going on up there but Campfire songs definitely was released before Sung Tongs.
See 2 replies

March 10, 2017
Does anyone know when and if Animal Collective are going to reissue (and perhaps remaster) Spirit They're Gone Spirit They've Vanished, Sung Tongs, and Feels?
See 7 replies