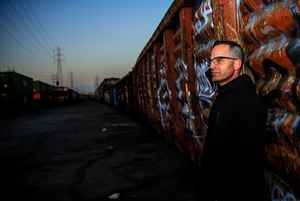 Profile:
Israel Vines — or just Izzy to his friends — is an artist, musician, and DJ who approaches electronic music on his own terms, with his own voice. Born in the South, raised in the Midwest, and realized in Los Angeles, Vines has carved out a singular space in the American underground, commingling futurist techno energy with raw, unbridled punk spirit — for Israel Vines, "techno" is not so much a sound as a frame. He borrows the unabashedly political swagger and intensity of early hardcore and hip-hop, pairing them with outer-world synthetic tones and interlocking bass-heavy polyrhythms that recall boundary-crossing sounds from London and Bristol. In search of the space between, Vines pushes dance floors to their catalyzing point.

Like many of his contemporaries, Vines came up in the American Midwest, the fertile crescent of first-wave techno and house. His education began in the house parties and DIY raves of East Lansing and Ann Arbor, where fast 'n nimble local selectors of the day mixed records with quick cuts and high tempos — and just like it was for many others, Underground Resistance, Basic Channel, and the rumblings of Birmingham techno opened his third eye. Later, a stint behind the counter at Chicago's legendary Gramaphone Records deepened Vines' appreciation for the art of DJing and gave him first-hand access to the tools of the trade. Graduate school in Detroit was where he sharpened his appreciation of techno as an artform — and made contact with Erika and BMG of Interdimensional Transmissions. Eventually, he made his way west, settled in Los Angeles, and began to coax sound out of the ether himself.

"I have no musical background at all. None — never played anything, can't read music, nothing," says Vines. Perhaps that's his punk rock spirit speaking, because that clearly hasn't stopped him. His first release came in 2011, on his own label Borrowed Language, in the form of a collaboration with Chicago producer Jeff Pietro. By 2015, he had joined forces with Detroit extraterrestrials Interdimensional Transmissions, who launched a sublabel called Eye Teeth to showcase Vines' post-techno breakbeat excursions. Around the same time, he debuted a collaborative project with Kit Geary, under the alias KGIV, with a new release due in 2020. Not long after, Eye Teeth will publish his debut album, a collection of elegant rhythm experiments in a minor key mood, nine tracks that encapsulate Vines' unique voice. An uncertain future lies in wait — stay tuned.