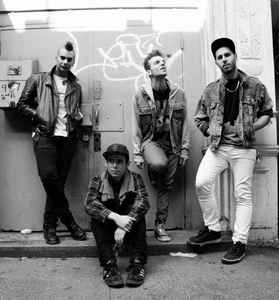 The So So Glos

Profile:
The So So Glos are a punk rock band formed in 2007 in Brooklyn, New York. The band consists of Alex Levine (vocals, bass), Ryan Levine (guitar, vocals), Matt Elkin (guitar, vocals) and Zach Staggers (drums, vocals). They have toured the U.S. and Europe extensively on their own and have supported a wide range of acts (seen most touring with The Front Bottoms). They are also recognized for their active participation in the all-ages music venues of New York City and the DIY movement in general.[1]
Members:
Alex Levine (6), Matt Elkin, Ryan Levine