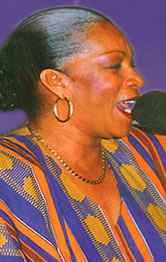 Profile:
Veteran mezzo-soprano female singer, Cynthia Schloss, is generally referred to as Jamaica's songbird. She was the third of six children and attended the Trench Town Elementary and Ardenne High School. Schloss got her big break at the Merritone Amateur Talent Exposure in 1971, where she won the finals singing First Time Ever I Saw Your Face. She then became a regular at shows and on the hotel circuit. Later, she ventured into recordings and made a memorable impact with songs such as Surround Me with Love, As If I Didn't Know, You Look like Love and Love Me Forever which sold over 100,000 copies.

Schloss is well known to the newer generation for her regular performances at oldies shows such as the Heineken Startime series.