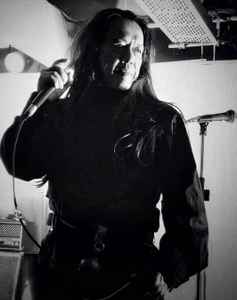 Real Name:
小長谷淳 (Konagaya Jun)
Profile:
One-man industrial/power electronics/noise project from the 80s. In the early 80s Jun formed White Hospital together with Tomasada Kuwahara. They released one album called "Holocaust" in 1984 before disbanding. Kuwuhara moved on to Vasilisk, while Jun released a number of solo records as Grim and one track as Howling Of Himalaya on compilation called "Constructive Music 1990".
Sites:
Twitter
Aliases:
Howling Of Himalaya, Jun Konagaya
Variations:
Viewing All | Grim
Грим

Easily the best Japanese Power Electronics and Death Industrial Project out there. You can hear elements of folk music, experimental ambient and traditional organ music as well, that is often melded together with the noise and industrial contents. The music can very dark, but also sometimes quite upbeat at times (upbeat more in albums like 'Maha' or some parts you hear in 'Folk Songs for an Obscure Race'). An extremely unique project in the entire field of Power Electronics and Death Industrial and highly recommended to any fan of such music. You should also check out his solo project by his own name, Jun Konagaya, if you want to hear something that drags a lot closer to his Folky and experimental 'ambient' works; his solo works are usually very eerie, intriguing, melancholic and often funerary. As for his first project (or group), White Hospital, you should definitely check out as well; Power Electronics with tribal elements mixed in. A truly gifted artist and most definitely one of the most original artists that comes in par with other like-minded artist's such as Brighter Death Now and Whitehouse and an artist that much deserves more recognition and acknowledgment.