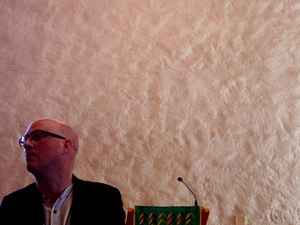 Profile:
Mike is the publisher of Touch. Curator & Producer; Lecturer & Publisher; Author & Editor; Moderator; occasional exhibitions/installations/performances. He has been running Touch with Jon Wozencroft since 1982 and started the sister label, Ash International, in 1993 with Robin Rimbaud. He is the UK Ambassador for The Kingdoms Of Elgaland-Vargaland, a member of Freq_Out and The Freq_Out Orchestra and a member of Field with Lasse Marhaug & Jana Winderen. He started the project 'Spire' in 2004, which links and develops organ and electronic music, including Fennesz, Philip Jeck, Charles Matthews and others. He has overall responsibilities for running Touch, dealing with artists, websites and general management. Mike also oversees Touch Music, the publishing part of Touch which deals with the marketing and exploitation of the Touch Music catalogue, which includes works by Christian Fennesz, Chris Watson, Philip Jeck, BJNilsen, Oren Ambarchi and many others.