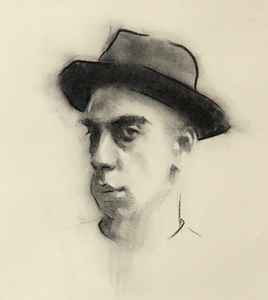 Profile:
After 10 years of building his analogue studio and honing his craft, Leonidas debuted with “Sequential EP” in 2012 on his friend Kay Suzuki’s Round In Motion label, to acclaim from a broad range of musicians and DJs, from Manuel Gottsching to Theo Parrish and DJ Harvey (who included “Interstellar Vibrations” in his “The Sound Of Mercury Rising Vol 2” compilation in September 2019). Leonidas subsequently collaborated on 2 further vinyl EPs (Synqlock Vol I & II) with Kay Suzuki, to wide acclaim.

His collaborations with close friend and Edinburgh label owner Hobbes have yielded 4 vinyl EPs (including Machines, Tapes & Electronic Setups and Mo Machines), while their 3rd (The Rags of Time EP) spawned the underground Balearic disco classic “Web of Intrigue” - voted no 1 in Bill Brewster’s Furtive top 50 original tracks of 2017 DJ poll. Their 4th EP (Aranath) arrived in May 2021 after garnering support from the likes of Brewster, Justin Robertson and Kenneth Bager, with both Gideon Coe and Nemone playing the ambient mix of "Web Of Intrigue (Long Haul Mix)" on BBC 6 Music. Leonidas & Hobbes were previously commissioned by the Pet Shop Boys to deliver 3 (unreleased) remixes of "Vocal" in 2013, and have featured on another 2 remixes on Hobbes Music.

Leonidas gained 3 further remix credits in 2018/19, on Stupid Human Records, Innsbruck’s Mont Lake Records and Portuguese house label Percebes. Another project, with long term friend and collaborator Jpye (Twonk & Friends: “L’Orient”) received a digital release on Balearic label Eclectics in 2019. Leonidas co-wrote and co-produced 2 tracks on Jpye's debut album "Samba With You" on Claremont 56, released in May 2021, one of which ("Oui, Non" a collaboration with singer-songwriter E113) was also featured on "Claremont Editions Vol 2" in November 2020.

In June 2020 Leonidas was inspired by Bob James's YouTube video "Black Lives Matter To Me" to create "Love For Black Lives" with his friend U:Guru providing sax and brass arrangement. The track was entered into a competition on Francois Kevorkian's "World of Echoes" Facebook page, which it subsequently won, gaining support along the way from Bill Brewster, Ashley Beedle and Phil Mison, among others. At the time of writing "Love For Black Lives" is pending an official release.

Leonidas is currently working on material for 2 albums, the debut album by Leonidas & Hobbes plus his own solo album, both of which will include collaborations with singers and songwriters, including E113 and Leo's partner Joanne.
Sites:
Bandcamp, SoundCloud, Facebook
Aliases:
LoveToParty
In Groups:
Twonk