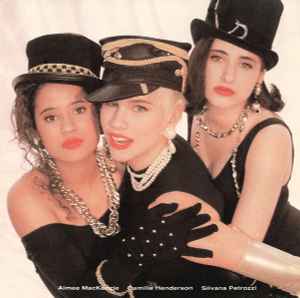 Profile:
The West End Girls came together in British Columbia in their late teens. Members Camille Henderson, Aimee MacKenzie and Silvana Petrozzi (now known as Silvana Kane of Pacifika) were groomed by songwriters John Dexter and John Livingston. Dexter hand-picked the girls in 1990 and groomed them under the moniker "Anne, Marie & Lisa", but later changed their name to 'West End Girls'. The act became Canadian teen sensations with their self-titled dance/pop debut album and the hits "Not Like Kissing You" and a remake of the Jackson 5 classic "I Want You Back". Petrozzi left shortly after the first album and was replaced by Janele Woodley and shortly before the release of the second album, Henderson left for a solo career. Her replacement was Celia-Louise Martin. By the summer of 1993, their second album "We Belong Together" was released. Their sound changed dramatically to R&B/Hip Hop and they had hits with "R U Sexin' Me", "State Of The Heart" and "Pure (You're Touching Me)". The group finally split up in 1994.
Members:
Aimee MacKenzie, Camille Henderson, Celia-Louise Martin, Janele Woodley, Silvana Petrozzi
Variations:
Viewing All | West End Girls
West End Girlz